There are three heritage buildings on the Museum site.

The Court House (built 1880) and the Langlois-Eteveneaux house (built early 1840s) are adjacent to the Museum entrance. A short distance away is the Customs House (built 1850s). All three buildings are managed by the Museum and have been undergoing a programme of repair, conservation and reinterpretation. 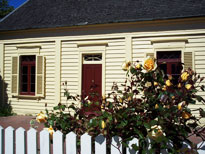 One of the oldest buildings in Canterbury, this house sits prominently on the intersection of Rue Lavaud and Rue Balguerie. It is the only surviving building made by the French colonists in Akaroa.

Built before 1845 the house has inward-opening shuttered casement windows and a distinctive bell eave to the shingled roof which distinguishes it from the rest of Akaroa’s colonial buildings. It is preserved in its original two-roomed form. 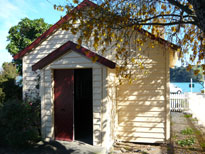 Located at the end of Rue Balguerie, near Daly’s Wharf, the Customs House was erected in 1858.

Akaroa was declared a customs port of entry in 1842, partly to control the smuggling of alcohol into the town. A sub-collector of customs was first established in Akaroa in 1843.

The building later became a survey office before being used as an annex to the Borough Council chambers, which used to sit beside it. The Friends of the Akaroa Museum took responsibility for the building in the 1970s, refurbished it and it has been a part of the Museum since. 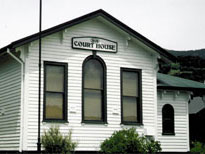 Seat of justice in Akaroa from 1880 until 1979 the Akaroa Court House is now part of the Museum.

A resident magistrate’s court was established early in Akaroa in 1840, as a response to the planned settlement of French colonists. It was not until 40 years later that a suitably impressive building was erected to house the court. The Court House, of government architect design, was built on the site of another important public building, the original French magasin, or store, built in 1840.